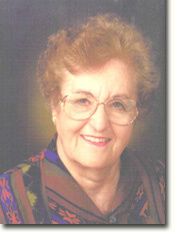 In May 2003, Margaret Hills passed away peacefully at home at the age of 78.  She has been laid to rest in Oaks Cemetery, Kenilworth, and will be greatly missed by all her family and friends, the staff who over the years helped to run her Clinic and Health Food Shop, as well as her patients, whom she considered as extended family, and many others whose life path crossed with hers.

Margaret's Catholic faith was of utmost importance and during her last weeks she was supported spiritually by her local priest, Father Kevin Hooper, on numerous occasions.  He enabled her to express her faith, her fears and hopes, looking beyond death and to a future that would proceed in a different vein, but in which we would all be reunited.  She believed that everything that happens in this world is organised from above.  The intense suffering I was subjected to in my 21st year was my first initiation to achieve my affinity with the dreaded pain of rheumatoid and osteo-arthritis.

At the age of 21, whilst training to be a nurse, Margaret developed Rheumatoid Arthritis. This had a fast onset, literally overnight, and resulted in 5 months of complete bed rest to aid her recovery. Years later, after completing her training, she then developed Osteoarthritis, which culminated in another attack of Rheumatoid Arthritis leaving her crippled and in severe pain. Realising that the medical profession could do nothing for her, as the only available treatment was aspirin, she began to look into natural treatments.

Margaret researched many different natural approaches to healing, including very traditional remedies such as Epsom Salts baths and Cider Vinegar. She then combined such detoxification remedies with a particular combination of nutritional supplements to develop her own treatment. After a year of following this treatment she rid herself of all signs of Arthritis and continued to lead a pain free life. The word spread gradually of Margaret Hills’ efforts to rid herself of all arthritic symptoms and many people contacted her to find out more details as so many were in a similar situation of extreme pain due to arthritis of some type. Due to huge public interest she opened the Margaret Hills Clinic to help others who were suffering and to guide others through their recovery. As the nutritional supplements that she recommended were quite difficult to obtain in the correct quantities, she eventually had her own formula produced exclusively. This was named the Margaret Hills Formula and has remained unchanged since the original formulation in the very early 1980’s. In the late 1990’s Margaret gradually withdrew from seeing patients at the clinic after fully training her daughter Christine Horner to continue her work.

It was her heart that struggled in later years; she suffered one major heart attack in her forties and many minor heart attacks that went almost unnoticed.  Her heart had been weakened and enlarged by rheumatic fever at the onset of arthritis.  She submitted to worried members of the family who urged her to seek medical attention, but could not go against her fundamental principles by taking any prescribed medication.  She would have done, if she truly believed it would help.

She had to leave off her work at the Clinic and rest more, which she found frustrating.  She was able to spend more time in her garden – another love of her life.  Nonetheless, being mentally very strong, she maintained her close contact with the activities at the Clinic up until the end, keeping us all on our toes as much as she could!  Her family always came first, but her Clinic ran a very close second.  She was delighted that it would continue in her absence and always humble about the effect her writings had had on so many people, not only in this country but all over the world.

Her creativity also showed in different ways; apart from the baking, cooking, sewing and other necessities in bringing up a large family, she painted pictures using oils and watercolours; her subject matter was varied – landscapes, animals, birds, people.  She had a couple of pictures exhibited at the Royal Academy Summer Exhibition.  She stitched the tapestry of the Last Supper, which hangs in reception at the Clinic.  She was always busy and expressed modesty but delight when her creations were praised!  She loved big band music such as the Ted Heath Band, as well as Irish music and dancing.  At one point Margaret also found time to be President of the Inner Wheel in Kenilworth- the ladies arm of the Rotary Club.  You know the saying Ask a busy person – they will always find the time!

Through her work at the Clinic, Margaret was asked to participate in programmes on radio and television.  In the early days, orthodox medical professionals challenged her work.  However, from working as a Theatre Sister, then in the community as a District Nurse and also as a Factory Nurse - and with her own personal experience of arthritis and the difficulties it created - she was able to stand her ground and put forward her point of view.  Now, more than twenty years on, natural treatments have gained a certain amount of respect – but still have a long way to go.  The challenges to Margaret's treatment are becoming less; indeed, many doctors, consultants and other health professionals are familiar with her treatment now and quietly suggest to some of their arthritic patients that there's no harm in trying.   There is nothing so satisfying as being able to help someone in excruciating pain gradually find their way out of that situation and regain control of their life.  With the knowledge that Margaret had, she could never turn her back on anyone in need of such help.  It was such rewarding work.

Margaret's life was spent looking after others: whilst young, it was her brothers and sisters as she was the oldest of eight children, a ninth having died at 3 months.  She was brought up in a loving but disciplined family, living off the land in the country.  She always maintained contact with many of her relatives in Ireland, America, Australia and visited County Kerry whenever she could.  As she married and started to bring her own children into the world, it was her family that dominated her life.  As they became independent, she returned to nursing; then finally to helping an ever increasing number of individuals in desperate need of help – through direct contact, through phone calls and letters, but mostly through her books.  She developed a presence in her local town, Kenilworth, by opening her health food shop in Millar Court, Station Road in 1989.

Margaret was born in County Kerry, Eire, on 4th March 1925.  She was known as Peggy Sheehy until she moved to England to pursue her career as a nurse.  She married Ivan Hills in 1950, produced eight children - fostered another - and had a full and happy life until 12th May 2003.